Our August 2022 newsletter includes a fascinating feature about NCSHOF member Hoyt Wilhelm, who was actually the first pitcher who worked primarily in relief to be named to the National Baseball Hall of Fame in Cooperstown. Our “Did You Know?” feature highlights some of the other members of the Hall—and this may be surprising—just how many other great major league pitchers are in the NCSHOF, and we could only list some of them. And you can also read about one NCSHOF inductee with a great career in baseball who took a very different route to the Hall; he was not a great player or manager but a skilled league executive. We hope you enjoy!

NCSHOF MEMBER OF THE MONTH 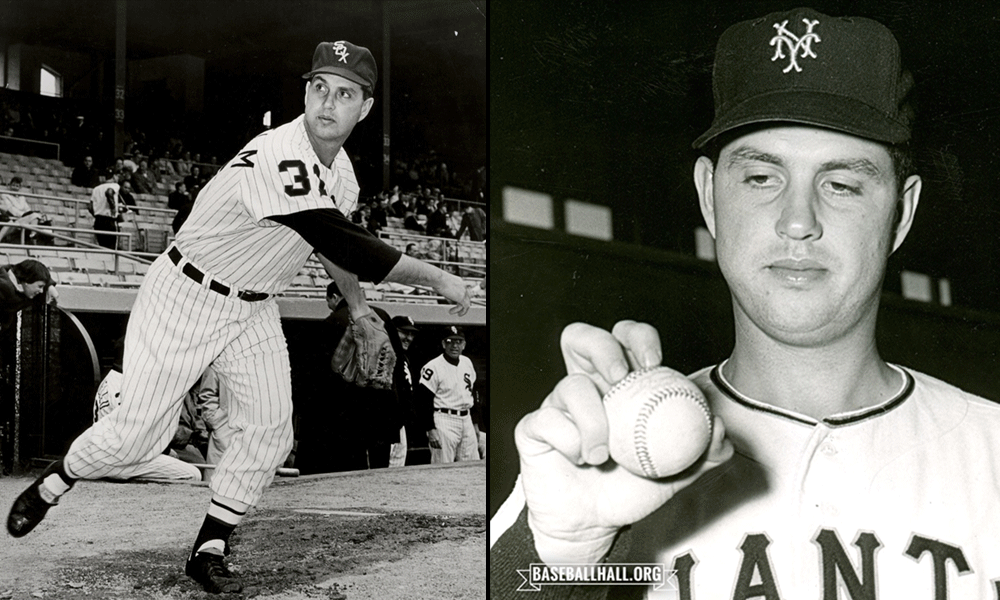 Hoyt Wilhelm’s career was a study in perseverance.

When he was barely 20 years old, he was cut from a D-league team, “which at that time was the bottom of the rung in baseball,” the pitcher remembered. Turns out, though, it was just a momentary setback for the determined son of tenant farmers in Huntersville, North Carolina.

“I didn’t give up,” Wilhelm said. “I still thought I could play, and I did get back in the game. And then to think after being released off the class D club, I wound up pitching a little over 20 years in the big leagues and being elected to (Baseball) Hall of Fame. That is unreal.”

Wilhelm told that story in 1985 when the knuckleballer – the player who a Charlotte newspaper once said “threw like a washerwoman“ — became the first relief pitcher ever enshrined at Cooperstown, voted in the eighth time he was eligible. An eight-time All-Star, he pitched for nine different teams and had appeared in 1,070 games – then an MLB record – when he retired in 1972.

Wilhelm would turn 50 just 16 days later. He was the oldest player in the major leagues in his last seven seasons, and people took to calling him “Old Folks.” He went on to manage two Atlanta Braves farm teams and work as a minor league pitching coach for the New York Yankees. There were times when he had to cut players, and he often talked to them about turning disappointment into triumph.

“There’s one hard, tough job, and that is telling a young boy that he is being released,” Wilhelm said. “…  Sometimes I’ve told a few of them that story, that very story about me being released at one time from the bottom, bottom club and still winding up pitching the big leagues.

“And I hope that to some of them, it has given a little encouragement.”

Wilhelm’s entire life was a story of triumph.

One of 11 children, he passed up a chance to go to college at Davidson and started playing for the Mooresville Moors in the Class-D North Carolina State League. He was drafted into the Army in 1942 went to Europe, fighting at the Battle of the Bulge. He was in charge of his unit’s heavy machine guns there and was wounded, earning the Purple Heart and his first nickname, “Old Sarge.” A piece of shrapnel remained lodged in his back after he was discharged and throughout his baseball career.

Wilhelm was the game’s master of the knuckleball, which he learned from watching Emil “Dutch” Leonard of the Washington Senators. He started throwing it as a teenager, practicing with a tennis ball, because he thought it was his best chance to make it to the major leagues. It soon became his go-to pitch and although it was difficult to handle – one manager even developed a bigger mitt for his catchers when Wilhelm was on the mound – it was extremely effective and helped prolong his career.

“(Hoyt) had the best knuckleball you’d ever want to see,” Wilhelm’s close friend and Orioles teammate, Brooks Robinson, told the AP in 2002. “He knew where it was going when he threw it, but when he got two strikes on you, he’d break out one that even he didn’t know where it was going.”

Roland Hemond, who was an advisor to the Chicago White Sox general manager when Wilhelm died, agreed. “Wilhelm’s knuckleball did more than anyone else’s,” he told the Chicago Tribune. “No one could predict what it was going to do. There was so much action on it.”

Wilhelm finally made it to the major leagues with the New York Giants at the age of 29.

Although he had been primarily a starter in the minors, Giants manager Leo Durocher thought Wilhelm and his knuckleball were better suited to come out of the bullpen. He pitched in his first game on April 18, 1952. Five days later, he batted for the first time as a Giant, hitting a home run in his first time at the plate – something he would never do again. Wilhelm went on to post a 15-2 record and led the National League in winning percentage, games pitched and ERA – finishing second in Rookie of the Year voting in 1952.

Another highlight of Wilhelm’s career came in 1958 when he was playing for the Baltimore Orioles and no-hit the New York Yankees 1-0 in a rare start.

Wilhelm was inducted into the North Carolina Sports Hall of Fame in 1968.

Did You Know? A Great Pitching Staff Could Come From NCSHOF Members! 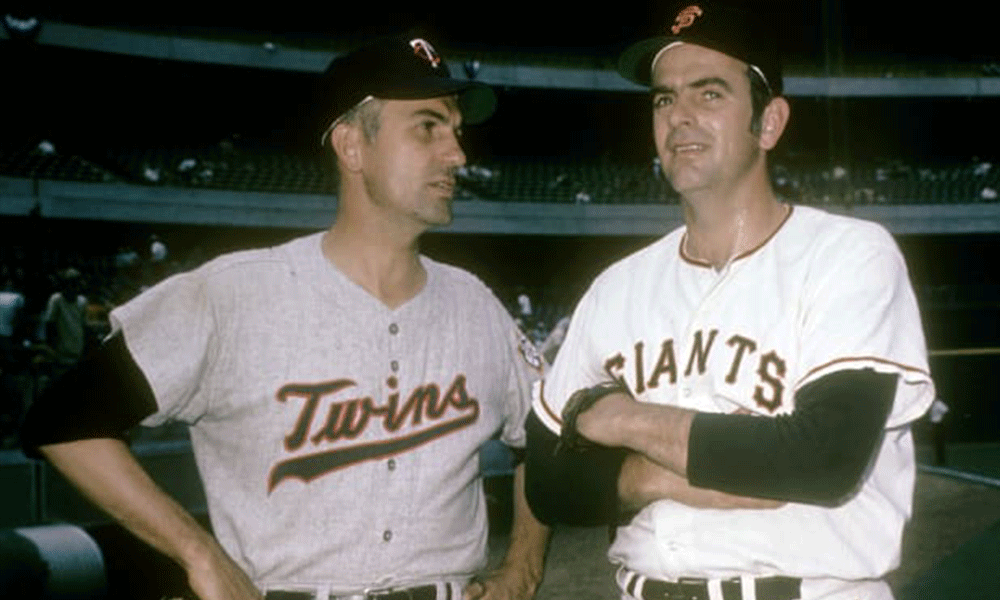 Our featured North Carolina Sports Hall of Fame member this month, Hoyt Wilhelm, was the first pitcher who hurled primarily in relief to be voted into the National Baseball Hall of Fame in Cooperstown.

Wilhelm’s election to Cooperstown in 1985 capped an amazing 21-year major league baseball career as a player.

But he is by no means the only NCSHOF member who piled up some amazing pitching stats in the majors.  In fact, North Carolina can claim a whole bunch of remarkable pitchers, many from small towns in the Tar Heel state, who could comprise a tremendous pitching staff including some of these outstanding starters.

The Perry brothers, Gaylord and Jim hailing from Williamston, are the only brothers to have earned Cy Young Awards as baseball’s top pitchers and also the first brothers to win 20 games in the same season! Gaylord won 314 games during his 21 MLB seasons as a starting pitcher with a number of teams, including 10 with the San Francisco Giants, and four times posted more than 20 wins in a season.

Jim rolled up 215 career victories, including 10 years in Minnesota of his 17 MLB seasons, and won 24 games during a great 1970 campaign. He even earned 17 wins for Cleveland at the age of 38, the team with which he broke into the big leagues.

But the NCSHOF also boasts of Jim “Catfish” Hunter, from Hertford, who starred for both the Oakland A’s and the New York Yankees and recorded 224 wins in the majors, including 25 in the ’74 season with the A’s. He also won a Cy Young Award and was an All-Star on eight occasions.

There are some great players from earlier eras who could also contribute to our pitching staff.  Tom Zachary was inducted into the NCSHOF in 1968 after a 19-year MLB career, pitching for both the Yankees and the Washington Senators, where he was on the pitching staff with the immortal Walter Johnson.  The lefthander won 186 games in the big leagues, including 15 or more wins in four different seasons.

Zachary, born in Graham, went to Guilford College and passed away in Burlington in 1969.

In 1967, Alvin “General” Crowder joined the NCSHOF, and the Winston-Salem native pitched 11 years in the majors, recording 167 wins.  Crowder won a whopping 26 games for the Senators in 1932 and 24 the following season.

This list represents just a few of the great pitchers who are enshrined in the NCSHOF and point to North Carolina’s tremendous baseball tradition. 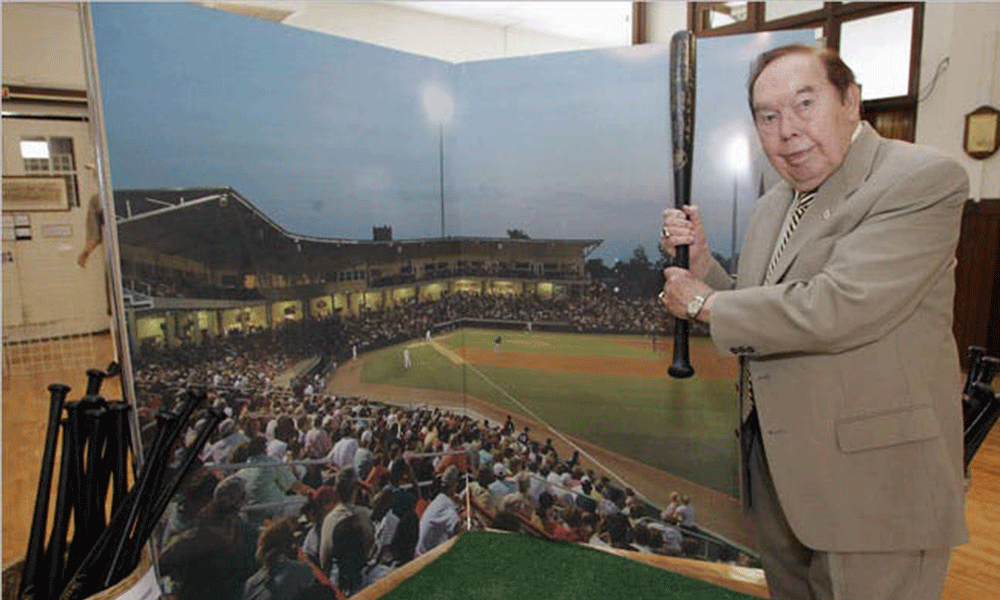 One topic we sometimes explore in our Hall Pass newsletter is the different paths that an individual can take to wind up being inducted into the North Carolina Sports Hall of Fame, one of the fascinating things about the Hall.

This particular question about what that path looks like is always a popular one when participants in the NCSHOF Student-Athlete program interact with members of the NCSHOF.

Of course, there are many members of the NCSHOF that were primarily phenomenal athletes, and we can see that especially with the large number of former major league baseball starts who have been elected to the Hall. But that is not even the only path available in the sport of baseball—the NCSHOF contains players, managers, umpires, and even administrators.

John Henry Moss was inducted into the Hall in 1984, with an incredible track record in minor league baseball. He was probably responsible for bringing minor league baseball to more North Carolina towns than anybody during his career, which spanned more than four decades. It is estimated by Minor League Baseball, Inc., that he brought the sport to 43 different cities across the country during his tenure.

He served as the president of the South Atlantic League from its inception in 1959 (as the Western Carolinas League) through 2007. Moss transformed a regional four-team circuit which was in danger of folding into a minor league powerhouse over time and was called by some “a titan of the industry.”

Much of the success Moss had in baseball stemmed from his political acumen. He also served his hometown of Kings Mountain as mayor from 1965 to 1988.

When Moss died, Pacific Coast League president Branch Rickey III, characterized Moss as “very deceptive,” but did so with great affection and respect. “You could never tell what he was doing, because it always looked like he was idle,” said Rickey. “He was never rushing anywhere, never frantic, never visibly distraught by anything. But despite this, he was always prepared and never ran out of options.”

After his death, Minor League Baseball created the John Henry Moss Community Service Award, presented annually at the Baseball Winter Meetings. The award honors Moss for his dedication and charitable service to baseball and his community during his 50-year tenure as a league president. It is presented to a minor league club that has demonstrated an outstanding, on-going commitment to charitable service and has exhibited support and leadership within its local community and the baseball industry throughout the season.

His gifts and dedication helped make North Carolina a true center of minor league baseball during his time—carving a different path for induction into the NCSHOF.

MORE FROM THE HALL